The first interview from the F*CK THEM-view series is with 6ix9ine. Tino Forbidden sat down with Tekashi69 at the Forbidden Spot Prague during his World Domination Tour. And they talked about a lot of rare stuff 6ix9ine’s never really talked about. What does his regular day look like? Does he have a secret weapon? What’s his favorite food joint in Brooklyn? And what would he tell Donald Trump? Watch, then read…

WHEN TALKING ABOUT FEAR. YOU DON’T SEEM TO BE SCARED OF ANYTHING…

THAT’S REALLY INSPIRING. AS I TOLD YOU BEFORE, I DON’T WANNA TALK ABOUT THE STUFF PEOPLE CAN EASILY GOOGLE ABOUT YOU OR WATCH ON ANY OTHER VIDEOS. I WANNA TALK TO YOU AS AN ARTIST. HOW DOES YOUR CREATIVE PROCESS LOOK LIKE?

AND YOU CREATE DIRECTLY IN THE STUDIO?

No, I create at home. Because I can’t freestyle. I can’t sit there and fuckin’ freestyle. Every artist is different, every artist expresses themselves differently. But for me, it’s just about the vibe, you know I’m sayin’?

BUT ALSO THE EXPECTATIONS GOT MUCH HIGHER. THERE IS ONE HIT SINGLE; THERE IS ANOTHER ONE AND YOU WANT EVERY NEW ONE TO BE BETTER THAN THE LAST ONE, RIGHT? HOW DO YOU DEAL WITH THAT?

Yeah, it’s fuckin’ lot of pressure. But it’s a lot of good pressure. 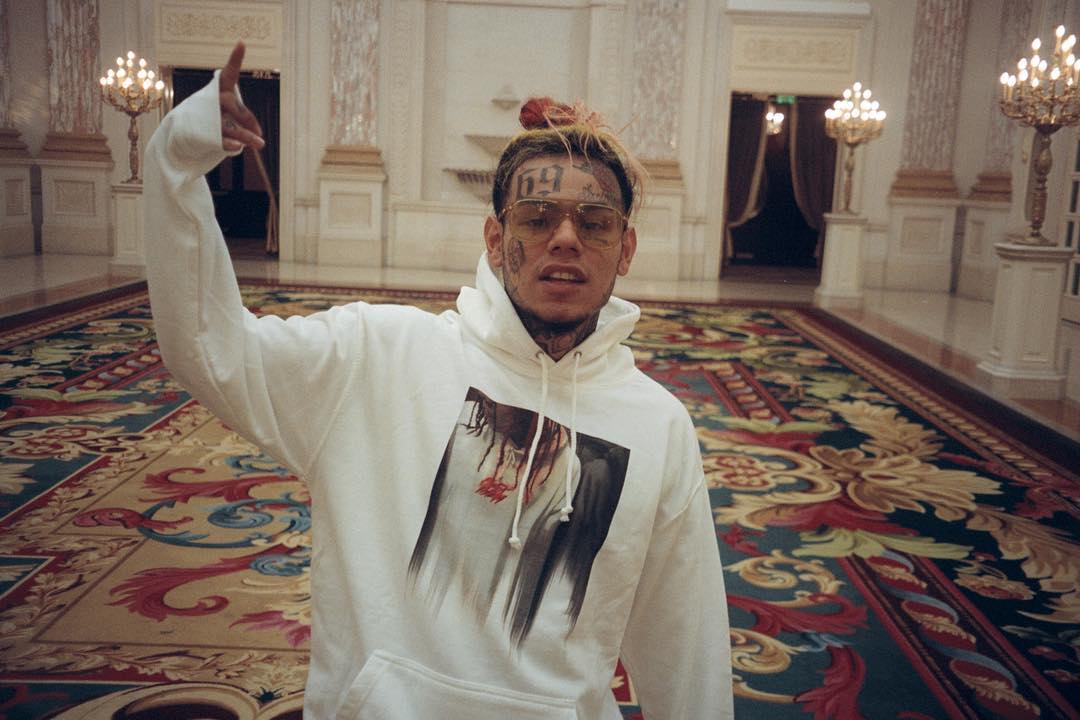 My daughter, my girlfriend, my family, my Mom, my brother, my dog. Just trying to be home next to them.

SO JUST THE FAMILY LIFE…

Yeah, yeah. You know, also friends… I live life on the edge, you know I’m sayin’? So I just try to spend time with my family as much as possible. Tomorrow is not promised.

HOW MUCH OF YOUR TIME IS ACTUAL MUSIC?

When the emotion comes, I’m going to the studio. I’m not in studio every day.

HOW BIG IS YOUR TEAM? 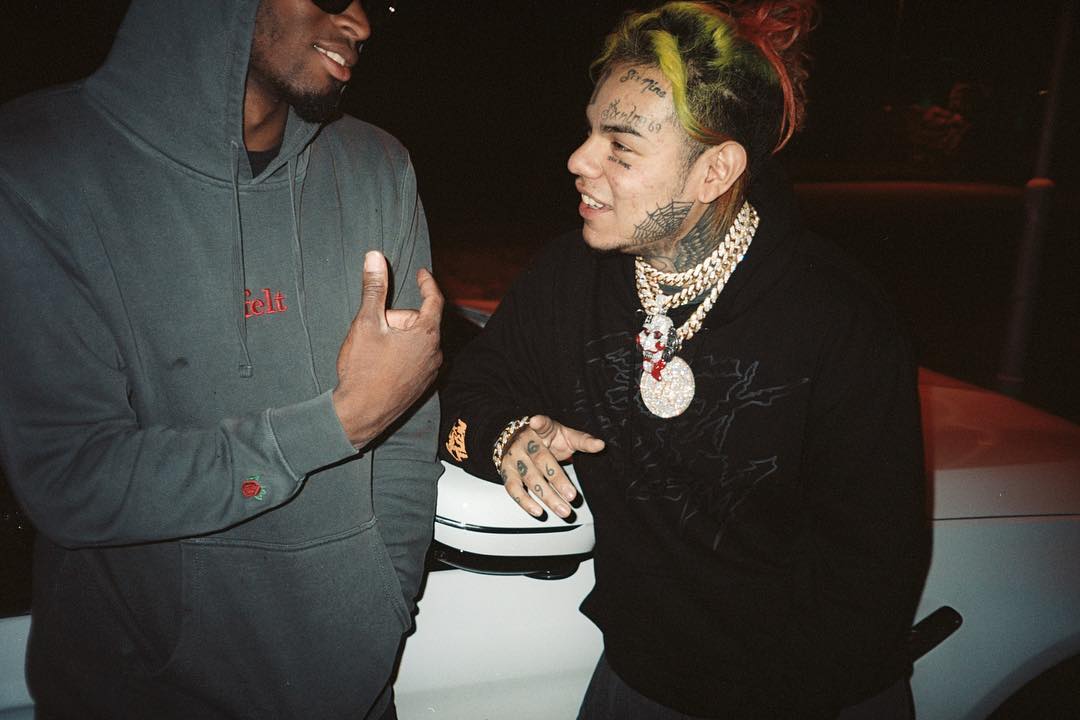 WHAT’S THE BEST PART OF DOING WHAT YOU’RE DOING?

AND WHAT’S THE PART YOU HATE THE MOST?

What I hate the most… I mean, it’s my life – I can’t hate it. Everything is just perfect.

HAD YOU HAD THESE KIND OF PEOPLE AROUND BEFORE YOU GOT FAMOUS?

AND WHEN YOU’RE FED UP WITH EVERYTHING, WHERE DO YOU GO? 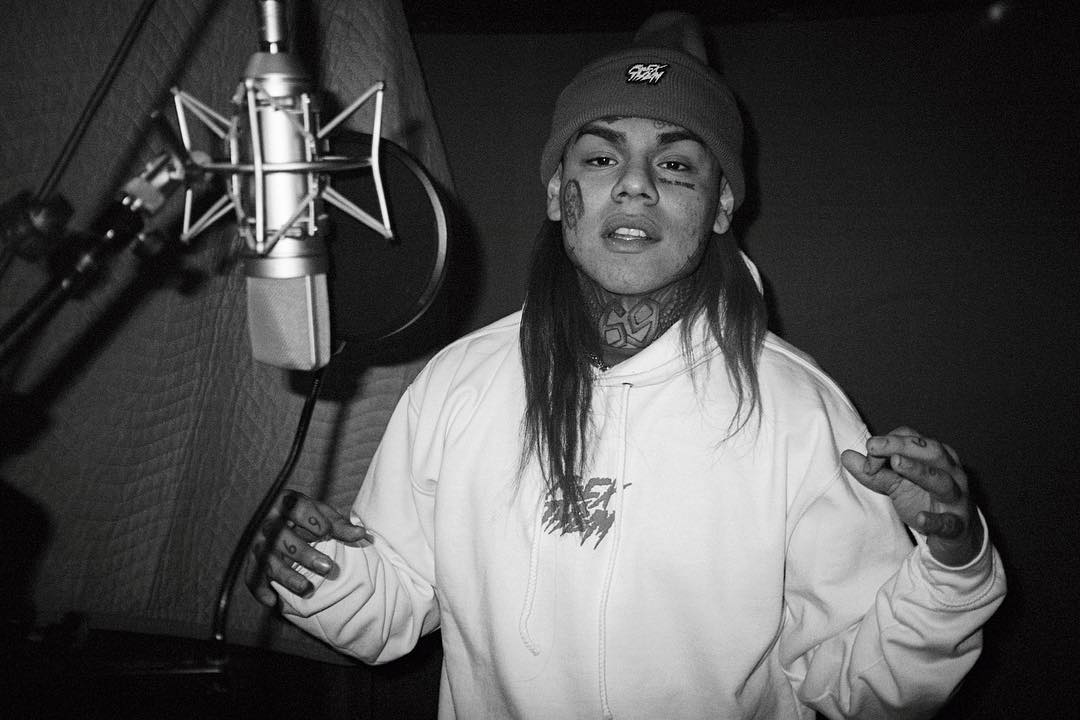 DO YOU HAVE AN ULTIMATE GOAL?

BIG PART OF WHAT YOU’RE DOING IS GIVING BACK…

…GIVING BACK TO COMMUNITY, TO KIDS. WHY IS THAT? AND HAVE YOU THOUGHT OF A 6IX9INE CHARITY?

MAYBE THAT COULD BECOME A CHARITY. TONS OF PEOPLE GOING AROUND AND GIVING AWAY CASH ON THE STREET…?

DO YOU HAVE A SECRET WEAPON?

AND YOU’RE NOT GONNA TELL ME?

Always got a secret weapon.

SO YOU’RE NOT GONNA TELL?

Oh, you wanna know? [Laughs] Can’t tell you. If you know what it is… I always got a secret weapon.

ALL RIGHT. YOU’RE NOT MUCH OF A DRINKER, YOU DON’T TAKE DRUGS. HOW HARD IS IT TO STAY CLEAN AND SOBER IN THE DRUGGY MUSIC INDUSTRY?

BUT ARE YOU ADDICTED TO SOMETHING? 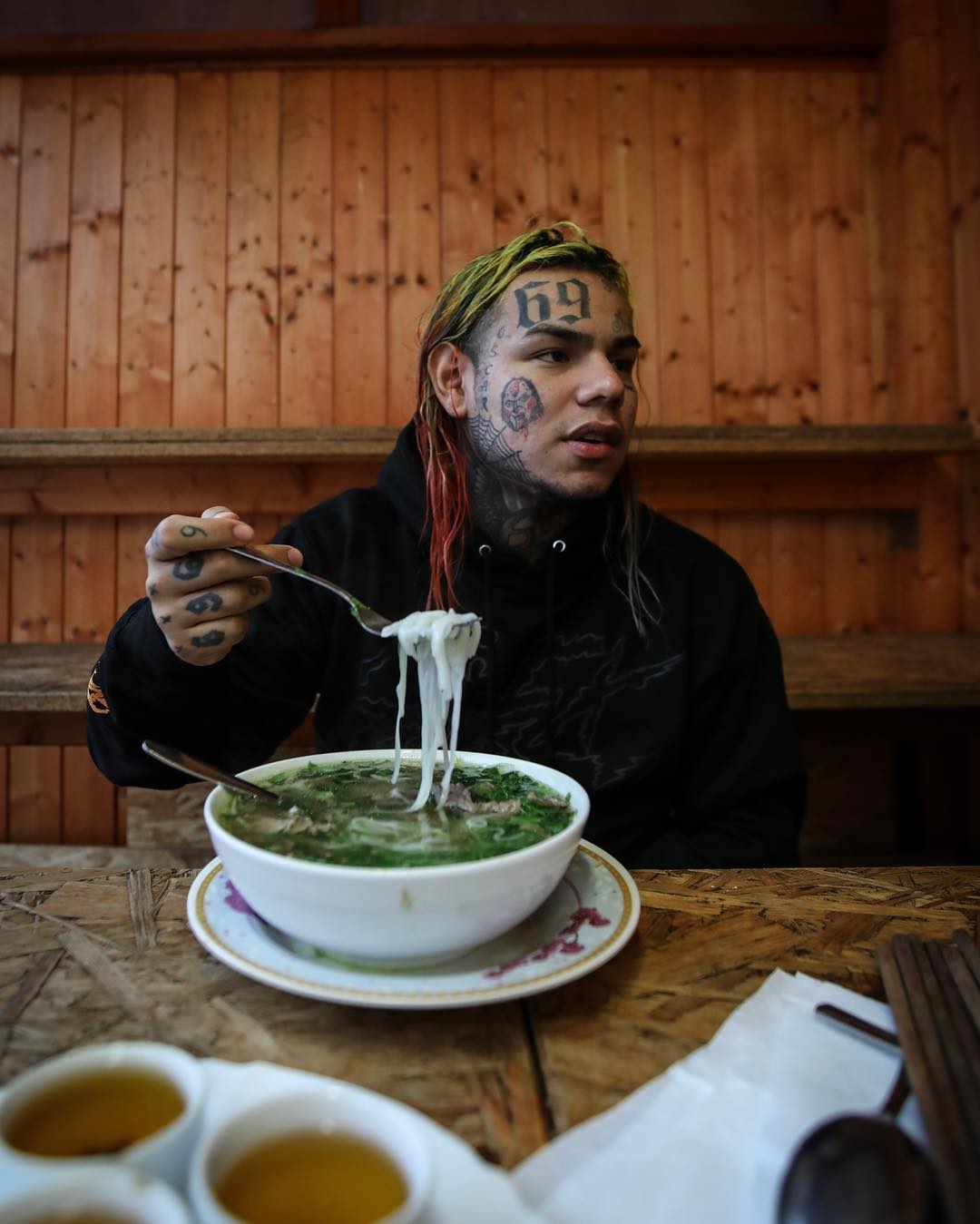 AND WHAT’S YOUR FAVORITE FOOD JOINT IN NEW YORK? WHERE SHOULD I GO? BUT NO CHICKEN WINGS PLACE – I KNOW HOW MUCH YOU LIKE THAT STUFF AS I HAD TO PICK SOME UP FOR YOU LAST NIGHT…

OK, JUST ONE QUESTION REGARDING BEEFS. BEFORE, IT USED TO BE ABOUT FREESTYLE BATTLES, DISS TRACKS. NOW YOU’RE TAKING IT TO ANOTHER LEVEL WITH INSTAGRAM LIVE, VIDEO CHATS AND STUFF. WHAT’S NEXT – VIRTUAL REALITY? WHAT IS THE FUTURE OF BEEFS?

To be honest with you, I don’t know. I just create it day by day.

IS THERE A MOVIE THAT REALLY INSPIRED YOU OR CHANGED YOUR PERSPECTIVE?

I like the movie Jigsaw. That’s a very good movie.

YOU’RE VERY SIGNIFICANT IN TERMS OF VISUALS. WHERE DO YOU FIND YOUR VISUAL INSPIRATION? DO YOU HAVE SOME ARTISTS WHO INSPIRE YOU?

Nah, I just like having fun. For all my videos, I just wanna have fun. So mostly just having fun – that’s where I get it.

HOW ABOUT TATTOO ARTISTS? DO YOU HAVE A SPECIAL ONE? 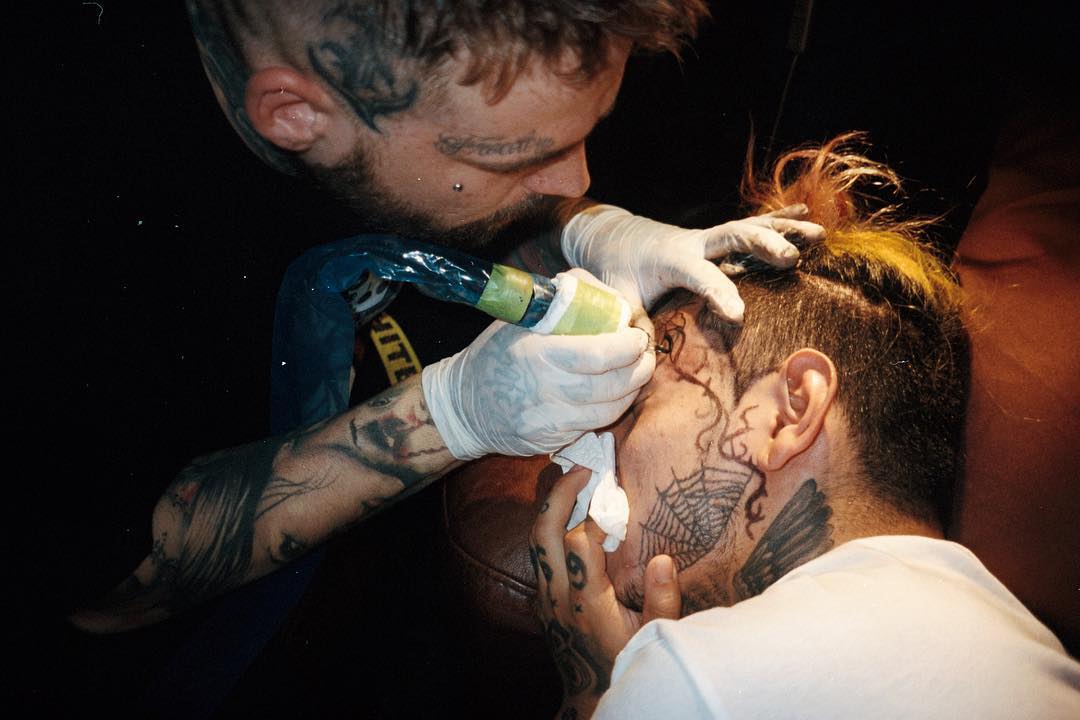 AND IF YOU COULD COLLABORATE WITH ANY ARTIST – DEAD OR ALIVE?

IF DONALD TRUMP WAS SITTING HERE, WHAT WOULD YOU TELL HIM?

WHAT ADVICE WOULD YOU GIVE TO YOUR 15-YEAR-OLD SELF?

MY VERY LAST QUESTION IS WHAT DO THE WORDS “F*CK THEM” MEAN TO YOU?

Fuck everyone. Fuck everybody. No one will believe in you till you make them believe. So fuck them till they believe. And fuck them after they believe, too. I feel like you don’t have to make people believe. They have to support me, believe in me until I’m done to be someone. Don’t try to be my friend after I fuckin’ made it. Just F*CK THEM.

ALL RIGHT, SO THIS WAS THE FIRST OF THE F*CK THEM-VIEWS, THIS WAS TEKASHI A.K.A. 6IX9INE…

THANK YOU SO MUCH FOR YOUR TIME AND FOR STOPPING BY AT THE FORBIDDEN SPOT HERE IN PRAGUE!

Stay tuned for more F*CK THEM-views by Tino Forbidden and his guests.